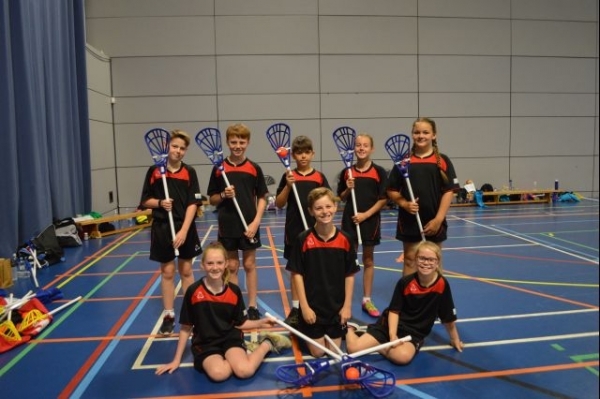 Last Sunday, our lacrosse team competed at the 2017 National Lacrosse Finals in Sheffield. It was a long day and the children returned home with a well-deserved trophy.

We arrived at the English Institute of Sport in Sheffield to compete – as the top team in Hertfordshire – against several other schools from across the country,

The first round consisted of four games from which each school earned points which related to whether they won, lost or drew and the number of goals scored.

After two narrow defeats, a draw and a fantastic win, the team went on to compete for the ‘Plate’. Boosted by their last win, the children displayed superb skill and teamwork as they went on to win the play-off, semi-final and final!

As winners of the plate, we officially finished third in the country – no mean feat and a fantastic accolade to be proud of.

It was a long, tiring and emotional day and the whole team were brilliant. Indoor lacrosse is an immensely fast-paced game and the children played some games back-to-back.

We are extremely proud of the team and what they have achieved. A big thank you to Mrs Light and Mr Sears for their coaching throughout the year, to the parents for their support at all fixtures and, of course, to Abigail, Bethia, Calum, Erica, Freddie, Harry, Jorja and Joseph.

You may be eligible for free school meals. Check here or speak to a member of staff.

A printed copy of any of the information on this website can be provided by the school office for free.